On our way to my house, we picked up Holly.

“Soooo, you actually chunked it in the dumpster?” Holly cringed.

“Yep,” I said, making my hands soar like the dumb book. “Heard it thud at the bottom. I’m through with it. Who knows what it would have conjured up next?”

“Yeah,” Francisco said. “I didn’t know Athena had such an arm! That wheelchair must build up huge muscles.” He squeezed my bicep.

“Stop it,” I protested, pretending not to like it but not doing a good job of it.

Shaking her head, Holly said, “You two, this is serious. I think Athena made a big mistake. She gave over control to the book which is a rule that must not be broken.” Pausing, eyes darting around, she stammered, “Uh… it’s…um…o-obvious, isn’t it? Would Aladdin ever allow the genie to make a wish for him? Would Dorothy from The Wizard of Oz ever let someone else use her magic ruby slippers?”

Francisco shook his head, laughing. “Sorry, I don’t agree. No one but Dorothy could use those magic slippers, and Wish Book is no genie. It does what it wants. I’m with Athena on this.”

“Totally,” I agreed, so happy Francisco and I were on the same team.

“Point taken,” Holly said. She loved arguments based on logic. She continued with an impish smile on her face, “But I say this magic book is indeed every bit as powerful as a magic genie or Dorothy’s ruby slippers, and if Athena would take the time to use it like she’s supposed to, she may find the reason it was given to her in the first place.”

She stopped for dramatic effect, raising her arm. “But I can tell you allowing the book to have its way is not one of them.”

I threw up my hands. “Holly, who cares? The book is gone. It’s probably on its way to the dump in San Myshuno by now.”

Holly moved ahead of us, not saying anything. We followed in silence. I had a feeling she wasn’t telling us something. The white flowered dogwood trees near my house were in full bloom, which gave me the idea to do our science experiment in the backyard. I loved the smell of spring. So fresh and sweet. And I adored sketching out in my backyard. The scenery would make the science project even more exciting. But I had to ask my mother if it was still okay to have Holly and Francisco over since I was grounded. 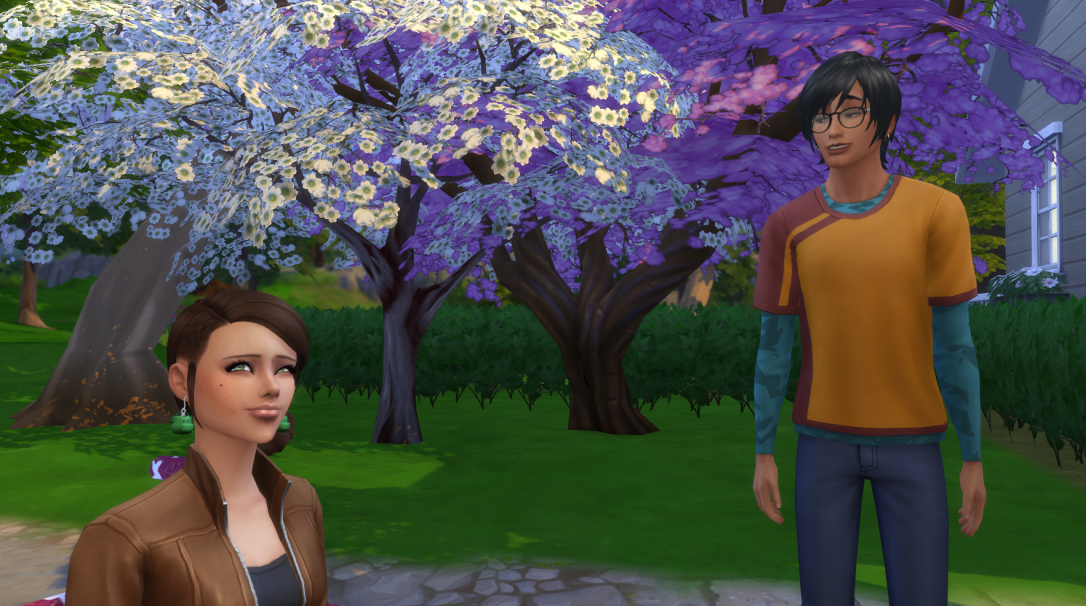 I stopped before I rolled up the wooden ramp to the door. “You guys stay here while I go check to see if it’s okay.” I also wanted to peek at my newly decorated bedroom. They both nodded. Holly and Francisco sat down on the front porch bench waiting on me.

Carefully, I entered. I heard a familiar voice cackling in the kitchen. Whizzing my chair over as fast as I could, I shouted, “Gran?”

She put her knives down on the counter then bent over, enveloping me in her squishy arms.

Gran was here! I rarely got to see her since my dad had quit his job. Four airplane tickets to Scotland would bankrupt us for sure and normally, she couldn’t see us more than once every two years. “How come everyone kept this a secret? Mom never mentioned your visit.” Gran’s silver eyes twinkled through her round glasses. “Well, that’s because she didn’t knoo herself.” Gran’s Scottish r’s trilled and sometimes she would speak so fast, I wouldn’t be able to understand every word. “It’s a surprise!” she announced. “Your parents stepped out to buy some groceries. They’ll be back shortly. I’ve been keeping a wee bit of company with the young lass over there.” She pointed toward the entryway closet, then bent closer to me and whispered, “It don’t look as if she remembers me now. Locked herself in the closet, she has. It took all me powers of persuasion to coax her out, but she won’t have none of it.”

Zelda. That girl. How she could be bratty to our sweet old Granny was beyond me.

“Sorry about that, Gran. I’ll try to talk to her.” Then I remembered Holly and Francisco sitting on the front porch. “Oh yeah, my friends are here. We’re about to do a science project in the backyard. Would you like to see them? I think you’ve already met Holly.” 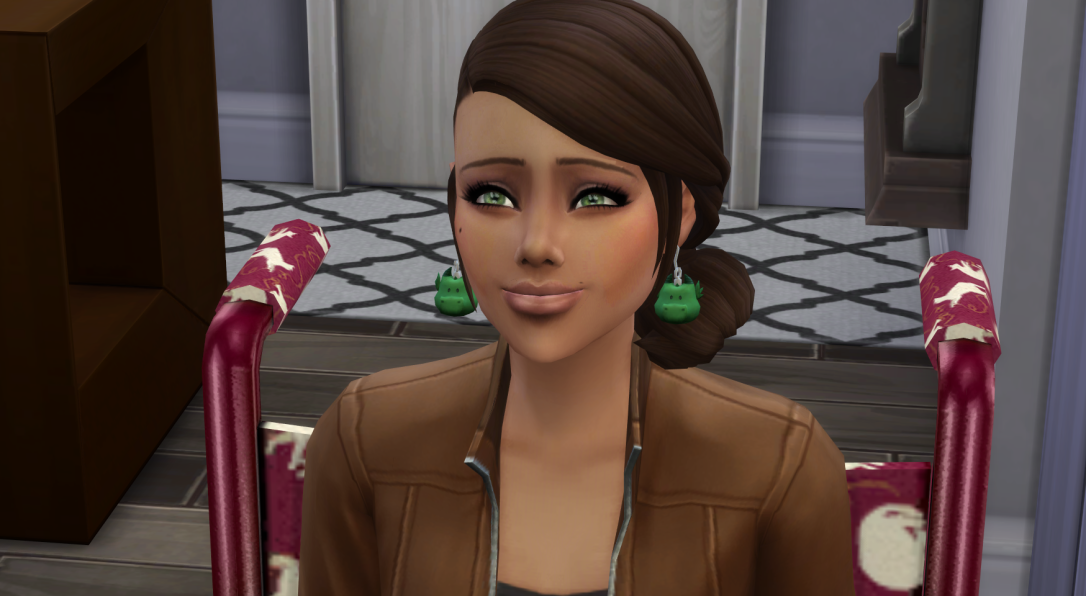 Gran beamed. “That sounds lovely, lass. Please, show them in.” 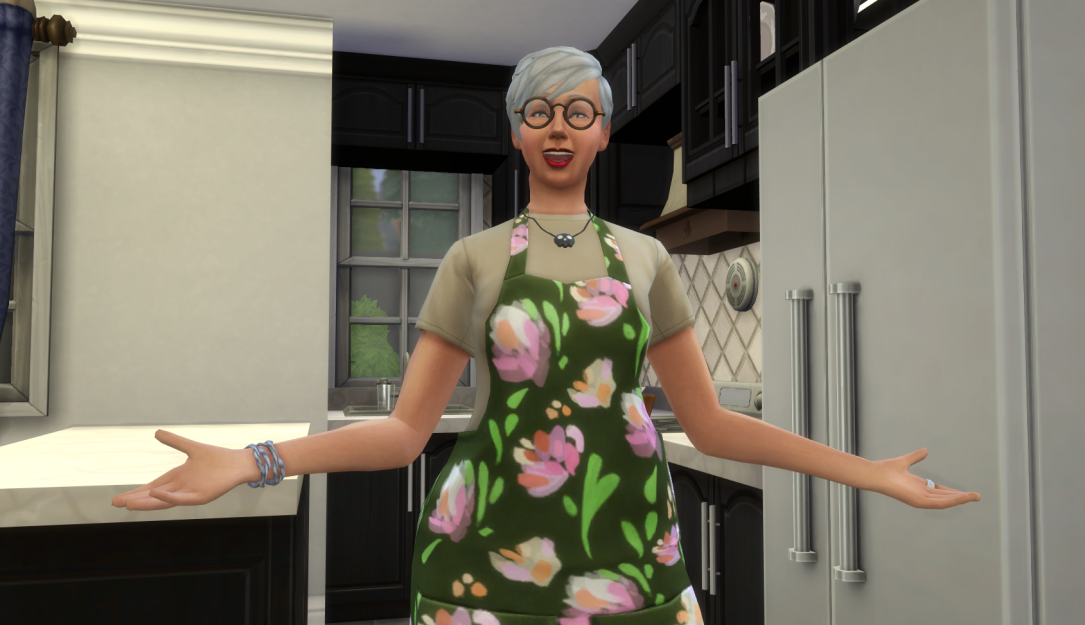 But before I could open the door, Zelda burst out of the closet, freaking out.

“What’s the matter, Zel?” I asked, trying to feign some normalcy. The girl was about to have a meltdown. I wondered what was wrong with her.

She took a peek at Gran then hollered, “That’s not Gran.”

I nervously glanced at my granny from Scotland whom I’d adored all my life. White, short haircut. Three deep wrinkles above her forehead. Milky, weathered skin. Smelled of gingersnaps and cigarette smoke. Black horn-rimmed glasses she’s worn like forever. Yes. That was Gran.

“I don’t know what she’s talking about, Gran,” I said, trying to make my grandmother feel better. “Zelda’s been having trouble lately. Yesterday, she destroyed my room and ranted about bad people. I’m a little worried about her.”

“Well, that’s okay, hun,” Gran responded to Zelda’s wild accusations. “Zelda, me lovely, I’m about to have a go at Toad-in-the-Hole. Yer favorite.” Then she squished her eyebrows, sliding her hand behind her head and whispered, “That should make her feel a wee bit better, don’t ye think?”

I grinned and nodded, throwing my head back thinking I could talk Zelda into eating my grandmother’s wonderful dishes. She cooked like a certified pastry chef. Once Zelda tasted the sausages and mouthwatering buttery crust of Toad-in-the-Hole, she’d change her mind. “Zelda, I’m serious. Behave!” “Why are you acting like this? She’s our sweet Gran!”

I sighed and told Gran we’d be in the backyard. She was so sweet and waved us off, saying it’d be an hour before her wonderful masterpiece, Toad-in-the-Hole, was ready.

I was so embarrassed. What had gotten into my sister?

I opened the front door and told my  friends I’d meet them in the back with the box full of science experiment stuff.

Once we got there, I gave Holly the box and she put it down on the ground.

Francisco motioned at Zelda. “What’s with the rugrat?” Zelda stuck her tongue out.

I sighed. “Come on, guys. My parents are on an errand and my sister suddenly doesn’t recognize my sweet granny.”

Holly winced. “Your grandmother is here from Scotland?” Fear crept in her voice, “You didn’t say anything about her visiting.”

“I didn’t know about it until a few minutes ago.”

“What do you mean, hum?” Hum was Holly’s catch phrase for either something was very puzzling or very wrong.

Walking to the box, Holly piled a list of reasons. “Number one, you were given a magical book by a strange little girl that holds peculiar powers, some of which can be quite nasty.” She glanced over at Francisco. He blushed, no doubt recalling his goofy poetic rant about how he loves me.

“So, number two, your grandmother all of a sudden comes to visit all the way from Scotland without a word to anyone at this exact time. Three, your little sister doesn’t recognize her. In fact, she’s frightened.”

I gazed into Zelda’s silver eyes. “Why are you scared of Granny?”

“Zelda!” I hollered. “Take that back! Gran is very pretty for her age!”

But Zelda just winced and shook her head.

Holly scrounged around in the box. “Oh my GOD!” she cried, then whipped out a golden book.

I pointed. “W-Where did you get that?”

“Did you dig it out of the trash?” Francisco asked.

“No. It was here in the box! I just found it.” She resembled a girlie Sherlock Holmes who’d solved her first case. “It appears this book is not done with you yet, Athena.” She opened it and shoved the book into my hands.

“Oh no. I’m not drawing in this book again. If you love it so much, why don’t you wish in it?” But Holly didn’t have a look as if I should trust her. She was hiding something. “What is with you? How do you know anything about this book?”

Sighing, she dropped her hand, slapping her leg. “Don’t try to figure it out. We don’t have much time. Just…well, you need to make another wish. I’m not sure what, though. Think it through. It’s important.”

I glared at her not understanding why she wanted me to make a wish and why we didn’t have time. Confused, I thought about this situation. I hated that book and didn’t want it anymore no matter what Holly said. If the book wouldn’t allow me to throw him out of my life then I would wish him away. “Okay. Fine. Do you have a pen?”

“Awesome! I knew you’d listen to reason!” Holly dug through the box and pulled out a pencil. “Here!” She placed it in my hands.

I rolled over to the picnic table, readying my pencil.

I was about to start on my drawing when I heard the book say, “Let me do it.”

I looked at my friends, but it was clear they couldn’t hear what I was hearing. I gulped.

“NO!” I hollered, jerking my hand up to draw when suddenly, the sparkles crept up my arm as I felt a warm hand wrap around my fingers.

“Stop!” I screamed, but it didn’t stop. The hand thrust the pen to the page, ready to do what it wished. I was nothing more than a slave doing the bidding of an evil spirit.

Heart racing, I had to think fast. I was not about to let it draw whatever it wanted.

My hand wobbled uncontrollably as I fought against the unseen force. And during that struggle, I wished with all my might that I’d never accepted that horrible book.

I had only one thought. One purpose. One last wish to draw. My hand felt as if it was drawing in sand, but I drew anyway. Slowly. A face appeared. Then her skirt. A hand. Wish Book. Tiny sparkles. My wheelchair. Sweat poured down my nose as my arm burned against the power. Wish Book must have figured out what I was up to, because it fought against my pencil, trying to stop me, but I would…not… 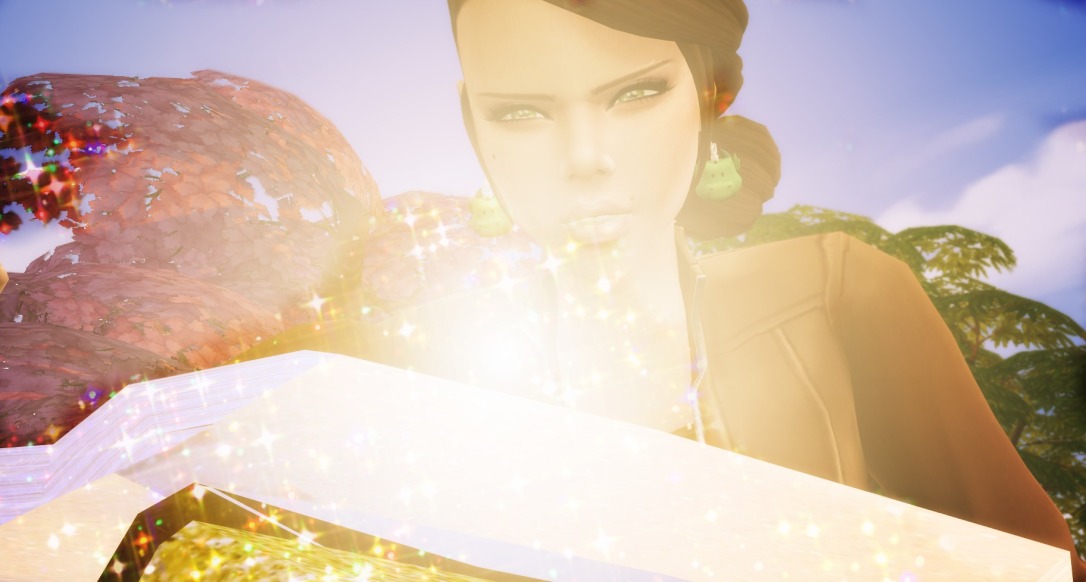 The pencil flew out of my hand, tumbling end over end, almost in slow motion until it landed in the middle of a flowerbed. Breathing hard, I turned my head slowly and peered down to see my picture.

I didn’t remember drawing all of it (I mean, what was up with that “Tough Love” shirt anyway?) But I’d hoped the message was clear and the stupid book would grant this wish.

I was giving Wish Book back to the girl. 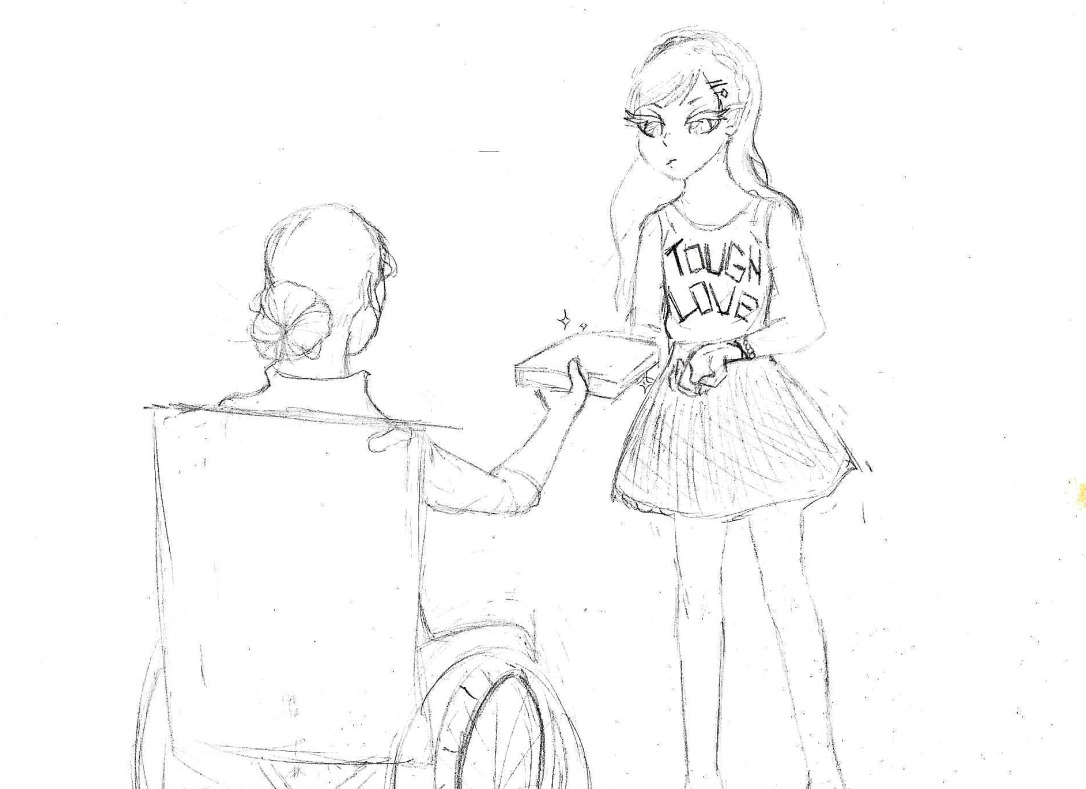 Going back to once a week updates.