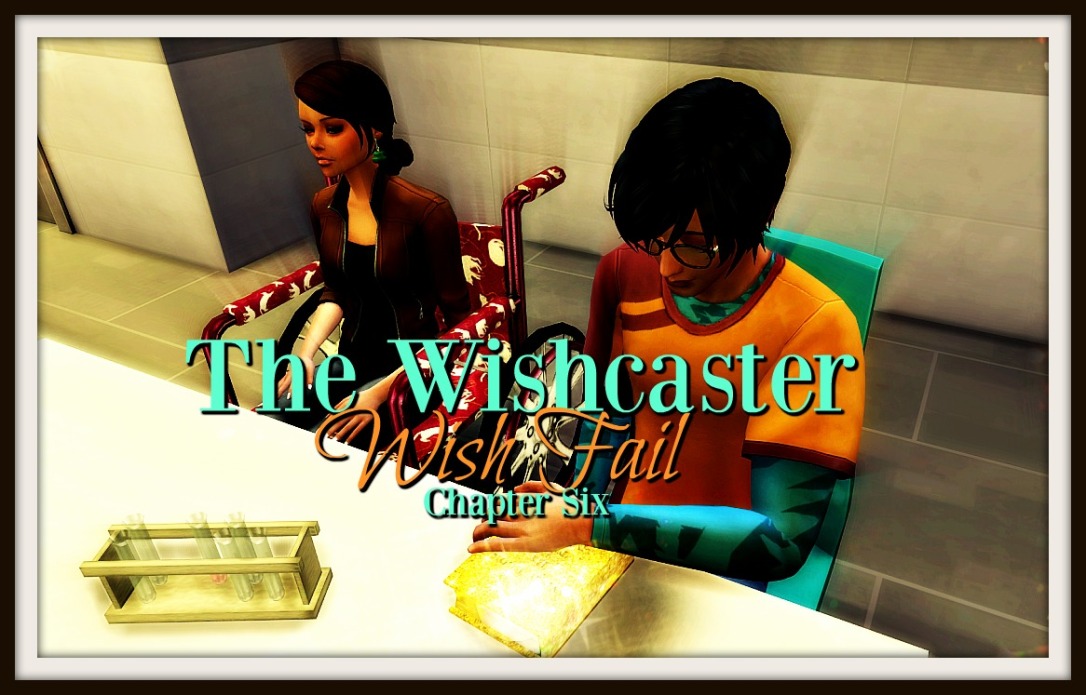 I literally zoomed to science. I wanted to warn Francisco about the strange book. Not only had it actually talked but it’d drawn a picture I didn’t see. Plus that impish giggle sent a nervous shiver up my back. When I arrived, Francisco beamed and waved me over to sit by him. The test tubes were already in a tray—one per lab pair. I noticed Holly perched at the back with us, writing in her notebook.

Mrs. Tanaka used Holly as a teaching assistant since this class was way too easy for her.

“Okay…let me see…” Francisco waggled his eyebrows, grabbing Wish Book out of my bag. “What awesome thing did you do for me in this class, huh? Is Mrs. Tanaka going to make me her favorite student? Give me an automatic A for the lab? What?” “Um…about that, Francisco…” I winced. “The wish didn’t exactly work out.”

“The book is creepy. It talked to me at the library and wouldn’t let me see what I drew.”

He shook his head at me obviously ignoring my warning. Jiggling the book like it was some Christmas present, he winked at me.

Freaking out, I said, “Wait, Francisco. Seriously! I wouldn’t touch that thing. Who knows what it’s capable of doing?”

But he didn’t listen. He eyed it feverishly. More dazzling than ever, the book looked as if it was taunting him.

I tilted my head. “Hey! It opened.” But I had a sinking feeling that wasn’t a good thing.

Francisco studied the page for a while, not saying anything. Francisco jerked away. His dark eyes glared at me and he whispered, “How can you ask me that?”

But the tardy bell sounded, cutting me off. Mrs. Tanaka hushed the class.

Quickly, I flipped the pages to my last wish. Blood flowed out of my head and arms. Wish Book drew me with some horrible smirk on my face and Francisco looked as if he was running up to the front of the class. And then…I wasn’t sure what he was doing, but it didn’t matter. The words, “Dum dum and stoopid”, had arrows pointing at Francisco.

“Class, as you can see, today is the day we get to do our organic lab. I want you all to make sure to…” Mrs. Tanaka stopped, cocking her head. “Is something wrong, Francisco?”

Instantly, Francisco bounced out of his seat and yelled, “Love potions!” His body convulsed like a huge demon had swooped into it, forcing him to twirl down the aisle as if he was a fanciful dancer.

He sashayed to the front of the class. And then started doing jumping jacks, chanting like a preschooler:

Hot blood pulsed through my face. My neck heated up like it was 120 degrees as my body seemed to sail upward, trying to flee the class, but never moving.

Laughter erupted along with tons of whistling and whooping. Some guys shouted, “Go for it, Romero!” I sunk my head in my hands, but peeked through my fingers at Francisco. Knees buckling and a face in full mortification, he apologized to Mrs. Tanaka.

Then he slunk back to his chair next to me, putting his face in his hands. I felt nauseated like I’d just punched an innocent person in the mouth even though I didn’t have anything to do with that wish. I whispered, “I’m so sorry, Francisco. I tried to tell you I wasn’t the one who drew that. Wish Book did.”

Francisco didn’t move. He didn’t speak or look up or do anything to make me feel like he’d think about forgiving me.

At that moment, I was trying to process what Francisco just announced. Did he really love me or was that some assholery done by Wish Book? I was so freaking angry, I decided right then what to do next.

I was going to throw that evil book away. I got out of my last period a little early. I hated to do it, but I blamed my wheelchair and my locker sticking and a whole assortment of other lame excuses. My Careers teacher, Mr. Glover, was a pushover. I didn’t need half of them. He was too busy reading some blog on his Slablet while the rest of the class blabbed to one another to really notice or care about what I was saying. He wrote me a pass and told me to be careful, never removing his eyes from the small screen.

Darting to Francisco’s locker, I waited as cockroaches seemed to crawl in my stomach. I prayed he’d listen to me and understand.

A few minutes after the last bell rang, I spied Francisco in the midst of milling kids, walking toward his locker. “Oh no you don’t,” I muttered to myself. I dodged people with my wheelchair trying not to lose him, but he was too smart for me. He dashed toward the back door of the school that people rarely took, knowing I wouldn’t be able to follow. Without a ramp in sight.

But I was determined, so I hit the bar on the door and rolled my wheels toward the edge of the concrete stairs, yelling, “Francisco! Wait! Let me explain!”

He shook his head. The look on his face made my throat tighten.

Out of desperation, I glanced everywhere, wishing for a ramp or a sidewalk or even a plank of wood. But there wasn’t anything except for a bunch of very steep and very scary steps.

My head swooned just thinking about what would happen if I attempted to topple down them. But I thought I’d threaten anyway. “I’m going to chase after you!”

Francisco bit his lip, squinting up at me. Then he fumbled for the keys to his motorcycle.

“I will!” I screamed, hoping he’d believe me. But he knew better. I’d freaked out around steps so many times or ranted about places not having ramps that I knew he’d bet I’d stay where I was.

Then Wish Book caught my eye.

I jerked my pointer finger at it.

“You owe me, Stupid. I don’t care if you can’t make things appear magically. You’re going to do my bidding right now.” I grabbed a pen out of my pack. Quickly, I sketched me sliding down the steps toward Francisco, only they weren’t steps. I drew a ramp.

I waited a moment, hoping Wish Book would do its magic. Maybe a teacher would bring a board or a construction worker would help me. There were a hundred possibilities.

Francisco put the key in and revved the engine. In a few minutes, he’d disappear. I had to speak to him. Now.

Not caring what happened to me, I decided to go down the steps anyway. I’d seen bike riders bob over steps, but you needed speed and balance. I was fairly gifted at balance and could do all sorts of tricks on my wheelchair, balancing on one wheel even.

“Okay!” I screamed. “You asked for it. I’m going to kill myself trying to talk to you!” Taking a deep breath, I backed up until the cold door handle stopped me, poking my back. Visualizing my wheelchair as a bicycle, I rotated my wheels as fast as I could. And wham!

The wheelchair soared through the air as if I’d taken off on a wheelie ramp.

My stomach felt like I’d just plummeted off the Tower of Doom as I flew over the steps. “Ahh!” I shrieked, gripping the rubber.

The wheelchair hit hard and bounced on the gravel, tossing the book out of my lap. The chair rolled a few feet then stopped. “I’m alive,” I whispered, heart hammering so hard it hurt. 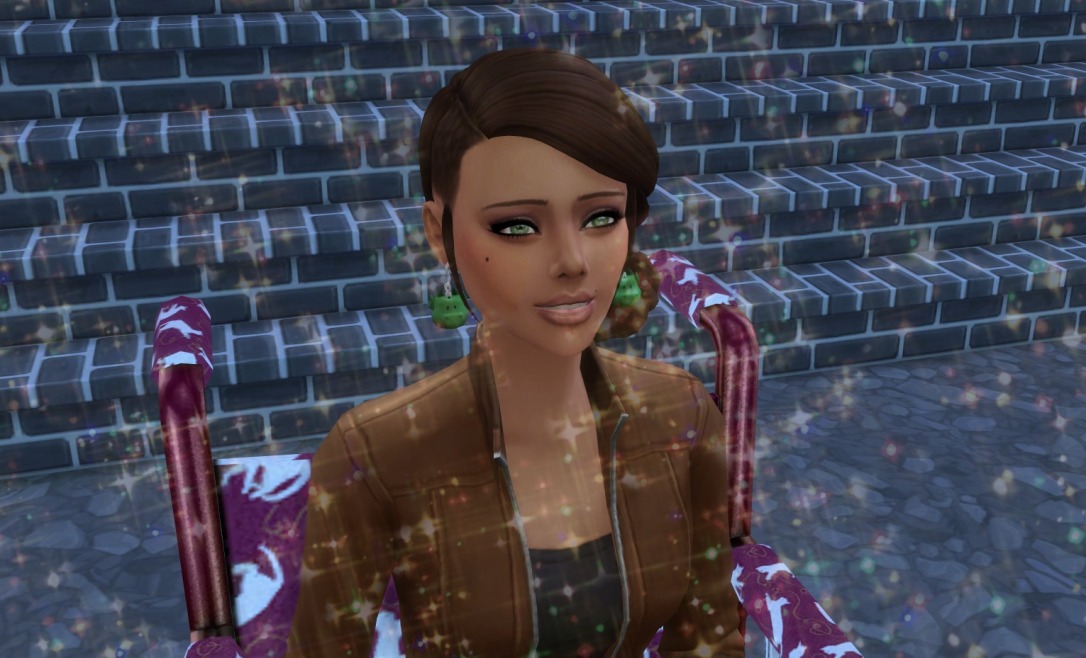 Francisco hopped off his motorcycle. He scrambled to me. “Are you nuts? If you think that’s going to make me forgive you, you’re wrong. Now I’m pissed as hell at you!” He turned around and pulled at his hair. He pointed at me. “Don’t ever do that again!”

His order infuriated me. “Don’t tell me what to do, Francisco. I can do what I want. I’m not an invalid.” “Well, don’t worry. I won’t be telling you what to do anymore because I won’t be talking to you.” The way he was acting made my blood steam. He wasn’t even giving me a chance to explain. Obviously, the book had some sort of power, and we didn’t even understand how it worked. Why couldn’t he give me a chance?

“Fine. But you’re losing a good friend who really cares about you. I didn’t draw that wish. Wish Book did. You hear that?” I pointed at the idiotic golden book, glinting in the sun.

“So, you expect me to believe that Wish Book draws your style of manga?” Francisco caught my eyes. “I know your style, Athena. You drew that.”

Pressing my lips together, I agreed. Sort of. “Okay, so yes, I did draw it, but Wish Book guided my hand. I didn’t even see what I was doing. My eyes were closed.”

“You want me to believe that?”

“Do you believe this stupid book grants wishes?”

“Then why can’t you believe it has the power to do any number of weird, assholish things? I’m telling you. IT. DREW. THAT PICTURE!”

Francisco threw his head back and heaved a sigh. Moments ticked. Finally, he said, “I don’t know…it just seems so unreal.”

“How real is a Wish Book that grants wishes? You say you believe it, so why can’t you believe me? Tell me this, Francisco, why would I want to hurt you? Does that make sense?” Staring at me with his brown eyes, I could see the wheels turning in his mind. I was making sense now. I was his friend. Why would I do that to him?

With a slow shrug, he finally said, “Yeah, I guess you’re right. Why would you want to embarrass me? And call me dum dum and stupid.”

“I wouldn’t. It doesn’t make any sense.”

Staring at the book, he went on, “I mean, if you hated me that much, you wouldn’t have launched your wheelchair skyward like some freakish flying squirrel.” I laughed, feeling my face warm. All the anger from a moment ago seemed to release like the air out of a balloon. “I guess not.”

Francisco smiled. “You want me to walk you home? I have to go over to your house soon anyway for the science project.” My heart fluttered. He was looking cute again.

“What about your motorcycle?” I asked. He shrugged. “I’ll run over and get it later. No problem.” Smiling at him, I pointed at Wish Book. “Can you hand the book to me? I have something important to do first.”

Once Francisco placed it in my hands, I wheeled over to a dumpster at the edge of the school property.

“What are you going to do?” Francisco asked.

“Open the lid for me and watch,” I said.

Hurling Wish Book in the air, I heard the book hit the bottom with a satisfying clunk.

SO, next update Wednesday, October 31st.